"Living Bread"  Rev. Joseph Connolly
I am the living bread that came down from heaven. Whoever eats of this bread will live forever; and the bread that I will give for the life of the world is my flesh.” — John 6:51.

I was nineteen when my grandfather, my father’s father, died in 1967. He finally succumbed to a series of strokes which left him weaker and weaker over the course of several years.
For reasons of which I am now unsure— perhaps they are mired in the murky fog of childhood memories— my grandfather and I had a special bond. While I can’t quite put a finger on how to describe that bond, I can safely state we had the same sense of humor— sometimes silly and physical— sometimes dry, verbal, intellectual.
An early interaction I do remember happened when I was, perhaps, five. One evening when visiting his home, I had a quiet tantrum. I curled up in an easy chair and, pretending to be asleep, refused to come to the dinner table when called. Page 1 of 7

Always a small, short, thin man, Grandpop was a little taller than five feet and probably weighed all of 110 pounds soaking wet. But he was strong.
He had been a sanitation worker when that meant picking up iron trash cans and lifting them into garbage trucks. Since I had curled up on a chair in a juvenile snit and everyone had waited way too long for my presence at the dinner table, Grandpop came to me, gently lifted me out of the chair, cradled me tenderly in his arms, carried me into the dinning room and sat me where I belonged. (Slight pause.)

By the time I was in my teens I outweighed him and towered over him by a considerable amount. By that time, he was living with my family. That’s when the strokes began to happen.
Typically, he would be sitting in his reclining chair in the living room, reading, invariably smoking an ever-present cigar, and start to have convulsions, begin to shake head to foot. Sometimes the episode would stop within moments. Sometimes it would linger.
Either way, we would rush to his side and try to comfort him. Sometimes he would recover right away. Sometimes he needed bed rest for a couple days.
I remember one such episode when I was a senior in High School. After the convulsions subsided, since I was now the strong one, I lifted him out of his chair, all 110 pounds of him, cradled him gently in my arms, carried him to his bedroom, laid him tenderly on his bed and sat by his side. (Slight pause.) You see, we had a special bond. (Slight pause.)

Amazingly, his condition landed him in the hospital only twice. The second time, when I was nineteen, was when he died. At that point in my life I had dropped out of college— probably a mistake— was still living with my parents— probably a mistake— and was working a night shift job— probably a mistake. Since I was on the night shift, I was headed home at about eight in the morning when I had an overwhelming sense Grandpop had died.
I walked into my family’s house and my cousin was there. That was not unusual, since we were a close knit family, she lived in the neighborhood, she was there often and was something of a matriarch in the family structure. With a tear in her eye she said, “Grandpa died.”
In a very matter of fact way, I said, “I know.” I’m sure she had no idea what my response meant since this was to state knowledge I could not possibly know in that era before cell phones. She never questioned it. (Slight pause.)

I went to the living room, sat in his chair, breathed in the smell of stale cigar smoke and missed him immediately. Perhaps I wanted to find a way to be somehow present with him.
I was old enough to understand things change, old enough to understand people die. But still, what can I say? My grandfather and I had a special bond; as I sat there his presence was all around me. (Pause.)

These words are from the Gospel we know as John: “I am the living bread that came down from heaven. Whoever eats of this bread will live forever; and the bread that I will give for the life of the world is my flesh.” (Pause.)
I hope it will not surprise you to know that competent pastors, before speaking about a passage, will consult several commentaries. The very first thing I read about today’s passage from John said it is one of the (quote): “most controversial and hotly debated in the Fourth Gospel.” (Unquote.) Why?
The (quote) “sacramental theology” (unquote) adhered to by some slams up against the (quote) “anti-sacramental reading” (unquote) of others. Those who do not favor a sacramental interpretation say there are no words of sacramental institution in John’s version of the last supper. Hence John, taken as a whole, is not interested in it.
Those who favor a sacramental interpretation say these are words of institution. Indeed, this passage is one in this section of John we hear from in the lectionary readings for several weeks in a row. And they could all be interpreted as referencing the sacrament. Jeremy preached on a different but similar section just two weeks ago. And yes, these words offer support to those who say transubstantiation, that bread and wine become the body and blood of Christ, describes the mystery of Communion. But they also offer support those who say it’s a commemorative meal and even offer support to all those who land between these two extremes. But is it possible this passage transcends those positions and points to yet another place? (Slight pause.)

Let’s consider the idea that the ground covered in the sixth Chapter of John is not about a definition of a sacrament but about feeding people. Where might that lead us? (Slight pause.) Well, this is where that observation leads me. John is the only Gospel in which Jesus makes “I am” statements— nine of them.
“I am the bread of life.” “I am the living bread.” “I am the gate for the sheep.” “I am the good shepherd.” “I am the resurrection and the life.” “I am the way, and the truth, and the life.” “I am the true vine.” “I am the light of the world,” and that one is said twice.
Our tendency is to emphasize the comparisons Jesus makes— comparisons to bread, a gate, a vine, etc., etc. Each of these are, however, in their own way, different. So, what is similar here? The phrase “I am”— and to where might that point? (Quietly.) You know what? The name of God in Hebrew is Yahweh. Among a multiplicity of meanings Yahweh means “I am.” It also means “state of being.” It also means “presence.” (Slight pause.)

ENDPIECE: It is the practice of the Pastor to speak after the Closing Hymn, but before the Benediction. This, then, is an précis of what the pastor said before the blessing: ( 1. This analysis is, in part, based on what is found on this passage and on this passage and on the whole 6th Chapter of John in The New Interpreter’s Bible: the Electronic Edition. Needless to say, the Electronic Edition of The New Interpreter’s Bible has the same information as the printed edition. pastor holds up an 8x10 picture of his grandfather and two children.) “This is a picture of my grandfather. The two youngsters are myself and my brother. Was there a special bond between us? I think so. Is there a special bond between us and God? I think so.” 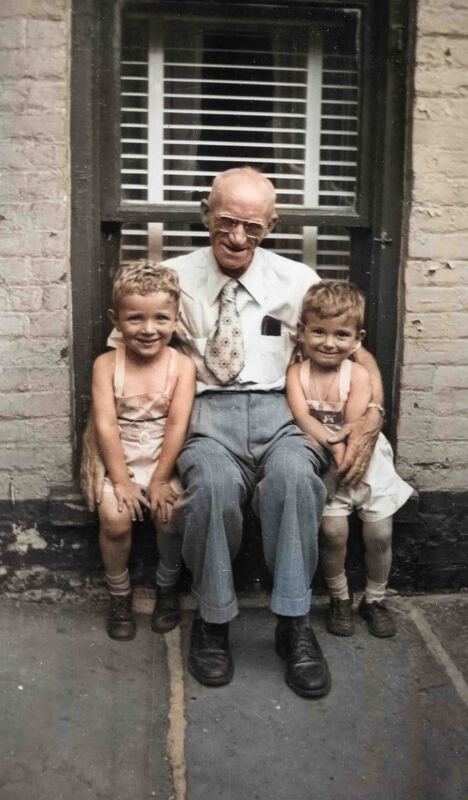 ​BENEDICTION: God’s Word lights our path. The risen Christ dwells among us. The Holy Spirit, guides, protects and sustains us. Let us go forth from this service of worship and offer service to the world in the name of Christ, for the grace of God is deeper than our imagination, the strength of Christ is stronger than our need, the communion of the Holy Spirit is richer than our togetherness. May God guide and sustain us today and in all our tomorrows. Amen
Proudly powered by Weebly