The South Freeport Church organ suddenly went silent during the prelude on Sunday early in 1995, even as organist Brian Frank continued to finger the keyboard.  Our Hammond "C" electric organ, with its refrigerator sized speaker located behind the sermon lectern, had blown a vacuum tube.  A replacement for the tube was eventually found.  But it was obvious that modern electronics had made our old organ obsolete.

George Dill, a retired businessman and high school math teacher, a violinist in the Mid-Coast Symphony Orchestra, and a member of our choir, had a lifelong love for music.  He dreamed of building a strong and lively music program at the South Freeport Church, and backed that dream by putting up the funds toward the acquisition of a real pipe organ.

The Music committee had been researching the availability of organs for about two years, when Sid Darrah spotted an advertisement by the Stroudwater Advent Christian Church offering their organ for sale.  With David Wallace, then curator of the Kotzschmar Organ at Portland's City Hall, as consultant Music Committee members examined the organ and decided it could be acquired and restored to operation within our budget if we were to provide volunteer labor.

The organ was originally built by Dr. Dwight W. Leighton of Yarmouth, who, as a young man started working at S.D. Warren, became a master carpenter, went to college in his thirties, and then attended medical school.  His lifelong hobby, however, was working on organs, whether repair, renovation, or construction.  When Stroudwater Advent Christian Church was built in the 1980's, Dr. Leighton built all the chancel furniture as well as the organ.

On a mid November Saturday in 1995, with Music Committee Co-Chair Wally Baker as coordinator of volunteers, about a dozen men of our congregation met at the Stroudwater Church at 9;00 am.  Under Wallace's direction they dismantled organ pipes, wrapped them in newsprint and placed them in 14 large wooden trays, which Wally had built, for transport and storage.  The crew loaded the console, the blower, and air chest, the volume shutters, tubing and most of the pipes into several pick-up trucks and by 5:30 pm had unloaded everything into various nooks and crannies in the church.  Two weeks later, the remaining air chambers, framework and pipes were dismantled and moved to South Freeport.

Throughout the winter, volunteers worked to convert the former choir robe and music storage closet into an organ room.  Peter Rice's construction crew cut and framed openings into the church area and secured new joists to the church's walls to support the air chests.  Wally Baker and Spencer Drake cut holes in the stage flooring, the sub floor, and the organ room floor to allow passage for the electronic cables connecting the console to the solid-state electronic control box, ordered specially for our organ.  They also fabricated and installed the large box and shutters for the Swell division's air chest and pipes.  Early in May 1996, another crew of 30 volunteers from the congregation spent a day washing and drying all of the nearly 800 pipes.

The control panel arrived in November 1996, and the winter was spent installing the various pieces, wiring, blower and tubing.  By mid February of 1997, volunteers had installed ten ranks of pipes.  The three ranks visible over the choir loft were delayed until the interior of the church could be painted.  By May, the organ was playing, and except for a final tuning and "voicing", was almost concert ready.  The organ was dedicated on September 21;  and, on October 18, 1997 we held our first special concert with guest organist Ray Cornils, Municipal Organist for the City of Portland, and Music Director at the First Parish Church, UCC in Brunswick.

George Dill died not long after the completion of the organ, but he loved its "wonderful raw sound".  As of September 2004 the actual expense for materials and services for the organ was a fraction of the value estimated by David Wallace.  Much of that value was provided by the volunteer labor of the congregation.

Since its installation, the organ has been improved by the addition of a set of 21 tubular chimes, a gift form the Peter Haskell family, which Peter installed in time for the 2000 Christmas Eve services.

George Dill's dream has continued to grow with the current new pipes:  replacing three ranks (61 pipes each) of the principal chorus and one new rank (of 61 pipes) comprising the trumpet stop.  With the addition of the new trumpet stop, we feel certain that George Dill would be pleased. 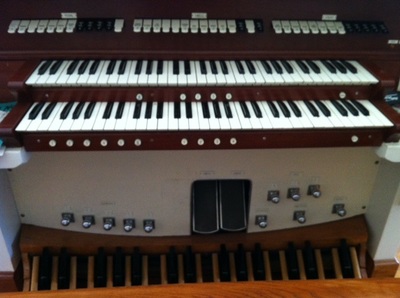 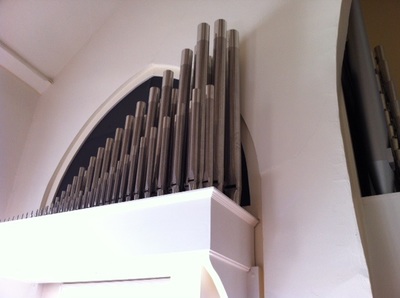 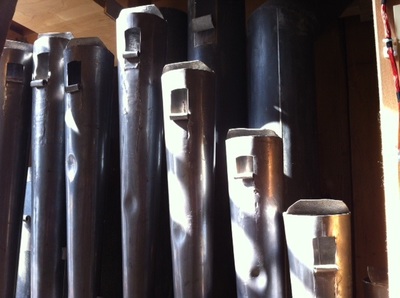 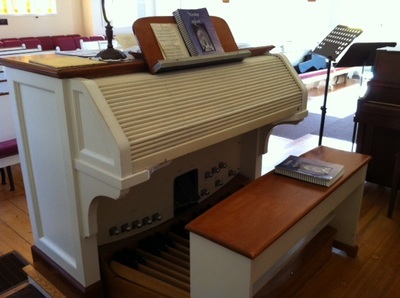 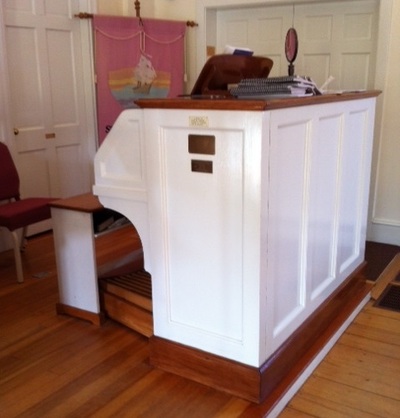 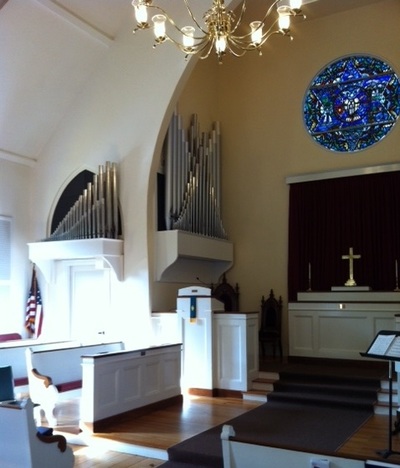 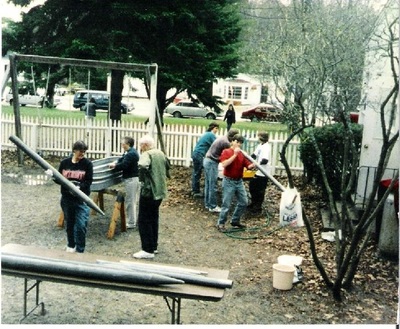 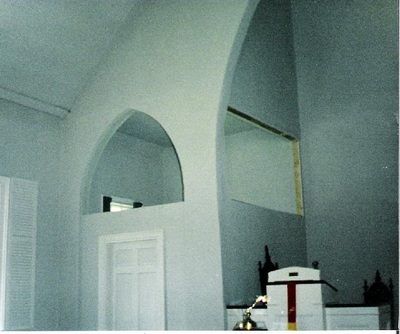 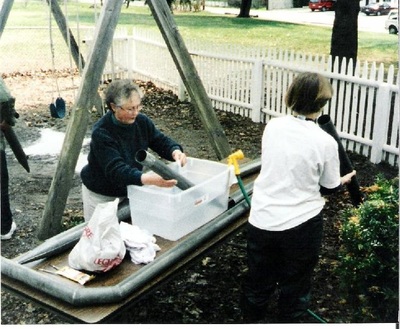 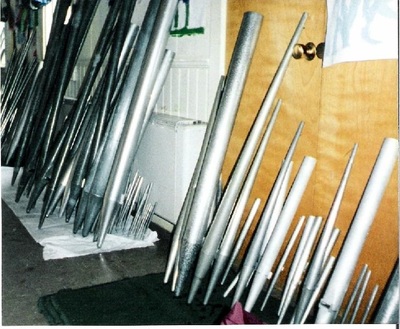 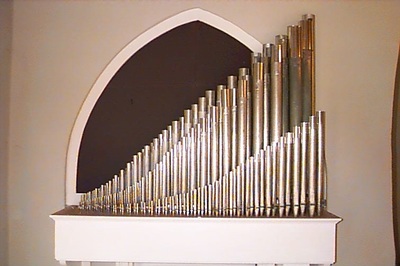 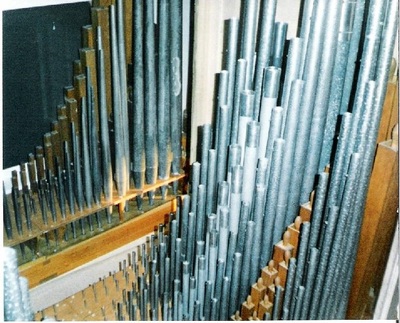 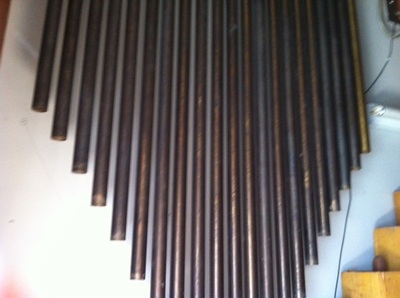 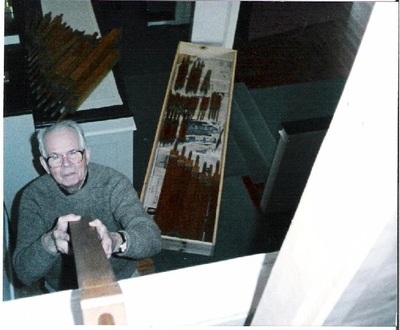 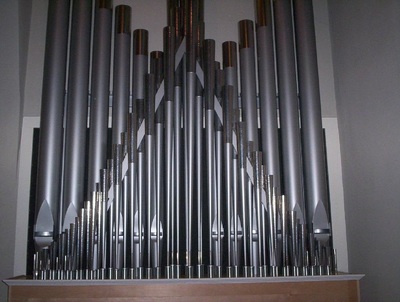