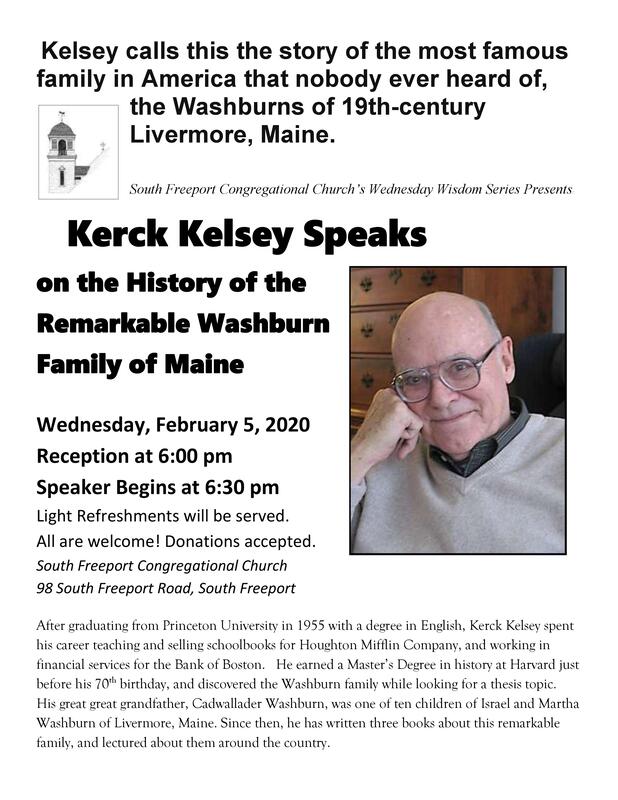 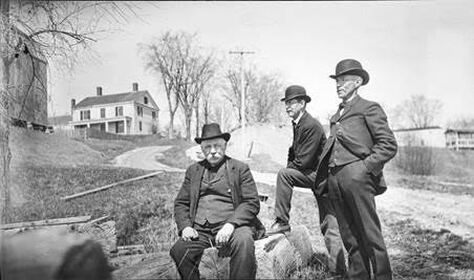 “The origins of this presentation came from a box of photographs and oversize negatives that came from my grandmother’s attic.”

Neva Star Soule was the daughter of Emily Soule and Josiah Soule. Born in 1875, Neva grew up in South Freeport. She married Fred Chase from North Yarmouth and they built a new house on Cumberland Foreside in 1900. Jim grew up in that house.

In that box were over 200 images and portraits, many of South Freeport Village taken from 1904 into the teens.  These images are combined with others from the collection of the Freeport Historical Society to create a presentation which includes public buildings, including the church and two schools, the coming of the Trolley system, Casco Castle, and background information of a few houses and the old Post Office.  Many early images of the Harraseeket and the waterfront are included.

Sukie Rice, Freeport resident and founder of Friends of Kakamega has been going to Western Kenya to work with Kakamega Orphans Care Centre KOCC for 17 years. Initially begun because of the HIV/Aids epidemic, the work of KOCC has developed many programs, but always its mission has been to lift children and families out of deep poverty and give them an opportunity to live healthier and more fulfilling life  with dignity and caring.
Sukie talked about the different programs of KOCC, how it got started and how it has evolved.  It is a story of community, joy and hope which springs from the goodness of many hearts and hands on both sides of the ocean.   Sukie's  presentation included many slides to help bring the story alive. 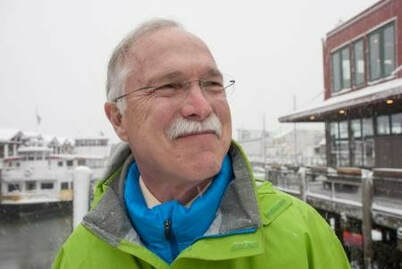 Wednesday, April 10, 2019
Dr. Chuck Radis
spoke about his book:
"Go By Boat"
After completing his internal medicine residency in 1985, Dr. Chuck Radis moved his family to Peaks Island off the coast of Maine and provided primary care to the islands in Casco Bay. In addition to his clinic duties on Peaks and Chebeague Island, he traveled year-round by boat to Cliff and Long Island for house calls.  Although Dr. Radis eventually left his Peaks Island medical practice for fellowship training in rheumatology, he continues to commute year-round on his boat Dasakamo. His children, Kate and Molly, attended the Peaks Island grade school--at 40 students, one of the smallest grade schools in Maine, and later graduated from Portland High School, a diverse community where more than 30 languages are spoken by immigrant and refugee students from around the world.
Throughout his years as both a primary health care physician and as a specialist, Dr. Radis has published both in peer-reviewed scientific journals and in the popular press. His essays on autoimmune disease have appeared in the Rheumatologist, the official journal of the American College of Rheumatologist.  He has written editorials for the Portland Press Herald on the narcotic epidemic, the logic of expanding Medicare for all Americans, raising the legal age for smoking to 21, medical marijuana (skeptical), and physician assisted suicide (against). As the founder and medical director for the Maine-African Partnership for Social Justice (www.mapsj.org) he travels regularly to the Kiryandongo United Nations Settlement in Uganda where he partners with refugee groups in innovative public health programs   Dr. Radis has been married for 40 years to Sandi Korpela Radis who began her career as a social worker and retired after 16 years as the Peaks Island plumber and electrician assistant.  He counts himself fortunate to have a recreational lobster license and occasionally brings home something for dinner. 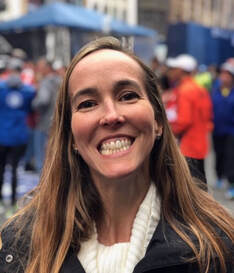 Physical Therapy: Injury Prevention
-- Ways to keep yourself healthy and fit at any age!
with Kathryn Morrison, PT

​About Kathryn Morrison, PT:
“I am Kathryn Morrison, a physical therapist for InterMed specializing in occupational health. I have been a practicing therapist for 25 years. Before moving to Maine I worked in an inpatient/outpatient rehabilitation unit in Arizona where I specialized in spinal cord injury and brain injury. Since my move to Maine in 2005 I have been employed by InterMed as an ergonomic specialist onsite at L.L.Bean.” 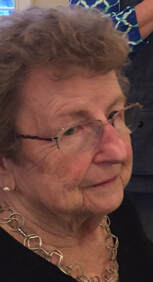 History of Freeport,
by Vaughndella Curtis

Lifetime resident of Freeport, Vaughndella Curtis  will be speaking on the History of Freeport  and her experiences growing up, getting married, and raising her family in South Freeport over the past 85 years! Her story will include memories of WWII and other times.
Vaughndella is a very active volunteer in the Freeport Community. She has served on various town boards and committees. She was South Freeport Church’s first woman council president. Vaughndella was also one of the founding members of the Freeport Community Services.

Culinary, Wine and Unique Travel Around the World with Ray Ramage​ 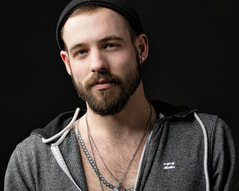 April 5, 2017
​​Simon Skold, alumnus, director and drama teacher at Freeport High School spoke on his experience writing, directing and producing the musical "Letters at Sea: the Tale of the Ship Hornet" and other fun adventures.
Simon Skold is the director and drama teacher at Freeport High School, the very school from which he graduated in 2006. After two years at Fordham University he transferred to the University of Southern Maine's theatre program where he learned the vocabulary of the trade. He raced his way to graduation (which he skipped), and spent some time satisfying his wanderlust. He lived in Palestine for a year and has also visited Jordan Qatar, Nepal, Denmark, Sweden, Nicaragua, Ukraine, Czech Republic and Canada. His first play, Birdies, Boots and Bonnets was written in his junior year of high school for their competitive one act piece. Between that and Letters at Sea he wrote a travel blog and many journals, but no plays. He plans to continue writing plays in the future. 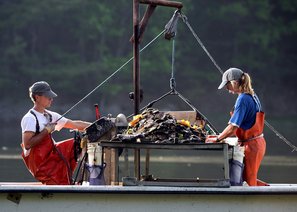 Eric Horne and Oyster Farming
(photo C. 2016 by Fred Field)
January 18, 2017
South Freeport Congregational Church welcomed local oyster farmer Eric Horne.
Join us in hearing about how he and his wife, Valy, have worked over the past decade to establish their Flying Point Oyster Farm on Maquoit Bay. They sell oysters to vendors and restaurants as far away as Boston and Washington D.C. 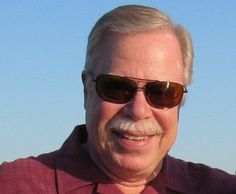 BOB ROSE on the Adventure of a Lifetime - Hiking the AT
October 5, 2016

In the Spring of 1996, Bob Rose of North Yarmouth, hopped a one-way flight to Atlanta Georgia....and, literally, WALKED back home to Maine.  He spent 5-and-a-half months thru-hiking the Appalachian Trail--a 2,175-mile-footpath north, to realize a long-held dream to walk the entire 'AT' in one season. Join Bob on October 5th at 7pm,as he entertains us with photos, details and personal stories about his 163-day adventure of a lifetime.  It's another exciting evening in our "Wednesday Wisdom Series" at South Freeport Congregational Church. 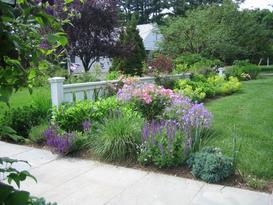 Susan Cherbuliez was trained in NY as a Landscape Architect, where she worked in both the public and private sector for 30 years, handling such projects as large parks, street improvements, and health care facilities that included hospitals, therapeutic gardens and nursing homes. Some of her work was done in a small private firm that she formed with a partner, coordinating projects with architects and engineers, not only in NY but also in CT and NJ where she was also licensed.  When she moved to Maine ten years ago, she continued for some time to commute to NY to complete selected work of the firm, including residential projects.  Then, she continued to work on residential projects in Maine, where she maintains a limited practice. 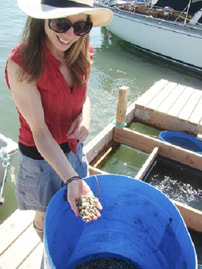 Sara Randall on "The Tides of Change"
On November 18, 2015 from 6:30 to 8:00 pm, Freeport native, environmental consultant and policy expert Sara Randall spoke on "The Tides of Change: How Climate Change and Development  is Impacting Freeport's Marine Resources".  For the last two years, Sara has been working as a scientific coordinator for the Freeport Clam Experiment, a series of field experiments designed to examine the effectiveness of different methods to protect shellfish from invasive green crabs and other predators and how to restore soft-shell clam populations.

Coffee and a dessert were served with a generous and much appreciated donation of homemade clam chowder by a local clammer. 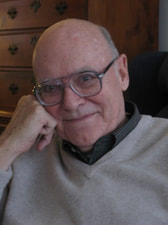 The History of Freeport Maine, By Kerck Kesley
​
On Wednesday, October 7, 2015 at 6:30 pm to 8:00 pm in our Community Hall, Kerck Kelsey, historian, spoke about the Indian Massacres to the buffalo herds; the interesting story of Freeport, Maine.  Kerck is a long time member of the South Freeport Church who traced various high and low points in the area's history, together with certain oddities that have drawn his attention over the past few weeks.  Especially for those who were not born here, Kerck's program was aimed at improving our appreciation of our town and our village.
Proudly powered by Weebly